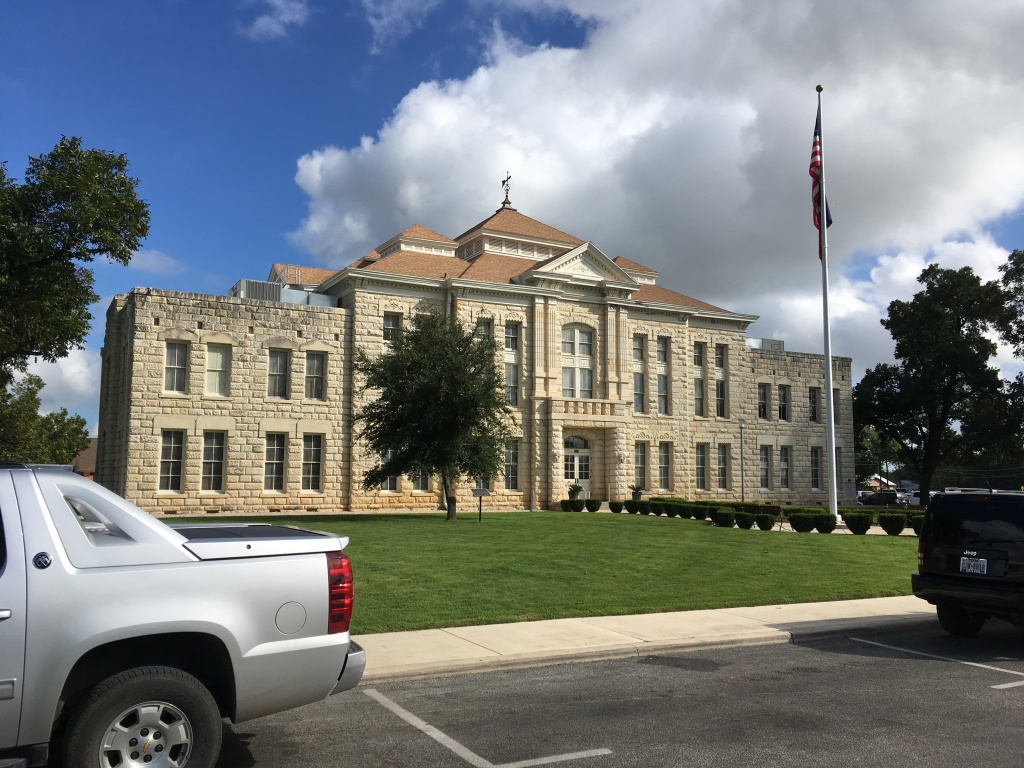 As someone asked me, Texans sure do love their limestone buildings, don’t they?  I replied that it’s almost like the entire state is made of limestone and granite…  This exchange would come back to haunt me.  I refilled my empty water bottle here and if my water was any harder, I could have carved a small statue out of it.  That said, the place reminded me of the local municipal/county buildings before the age of the War on Terror.  I walked right in without having to worry about security or checkpoints or any kind of impediment between me and the peoples’ business or anything like that.  All the small town courthouses I’ve entered have been like that.  I’m sure it’s a metaphor for something, but I’ll leave that to someone more clever than me. 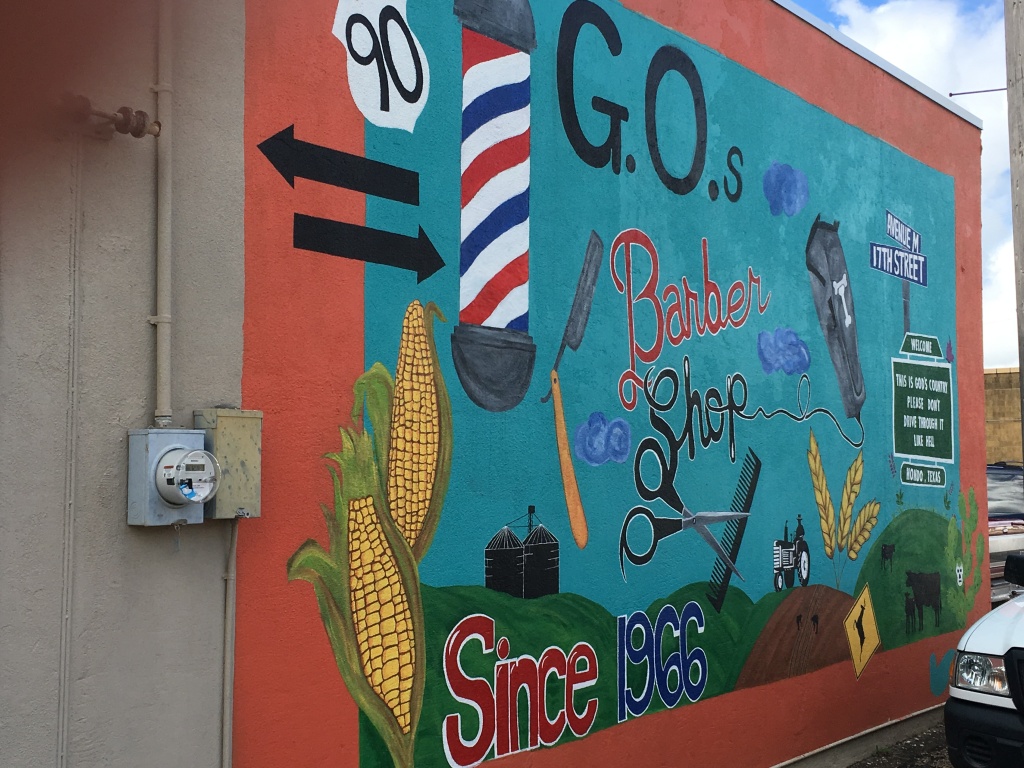 The courthouse has no memorials of any kind around it so there wasn’t much to see or tut over there.  So I took a walk down the street to the closest cache.  It was in front of a barbeque on their front porch.  They were closed, but there were already people waiting for the place to open for lunch.  What to do when there are muggles but the cache is sitting there in view, waiting to be grabbed?  Act like you belong there and do the thing.  It’s a lot easier when you’re a stranger and they’ll likely never see you again.  So I did.  Cache claimed and returned, I started back to my car (donut in hand because I hit a donut shop just before it closed) and then faced a different problem.  I sat there thinking for a moment that I was only about 30ish miles from Uvalde (Uvalde County).  And that was only about 30ish miles from Brackettville (Kinney County).  And that was only about 30ish miles from Del Rio (Val Verde County).  It would be pretty awesome to hit the border.  Of course, my logical brain returned.  My trip was already going to be over 300 miles.  I didn’t need to add another 200 miles.  And, if I’m going to hit those three, there are two more on the way back I’d have to get or else I’d have to come back out here.  And I sure didn’t bring my passport so if I cross the border, getting back gets slightly problematic (though less so because I can’t imagine them thinking I’m tying to sneak back into the country.  Being black might actually work in my favor in that case)…

No.  As seductive as that idea was, I have a life and things to do and, as much as I would like to keep going just because, I’ve got a plan and an itinerary and I’m going to stick to it.  I started the car and headed off. 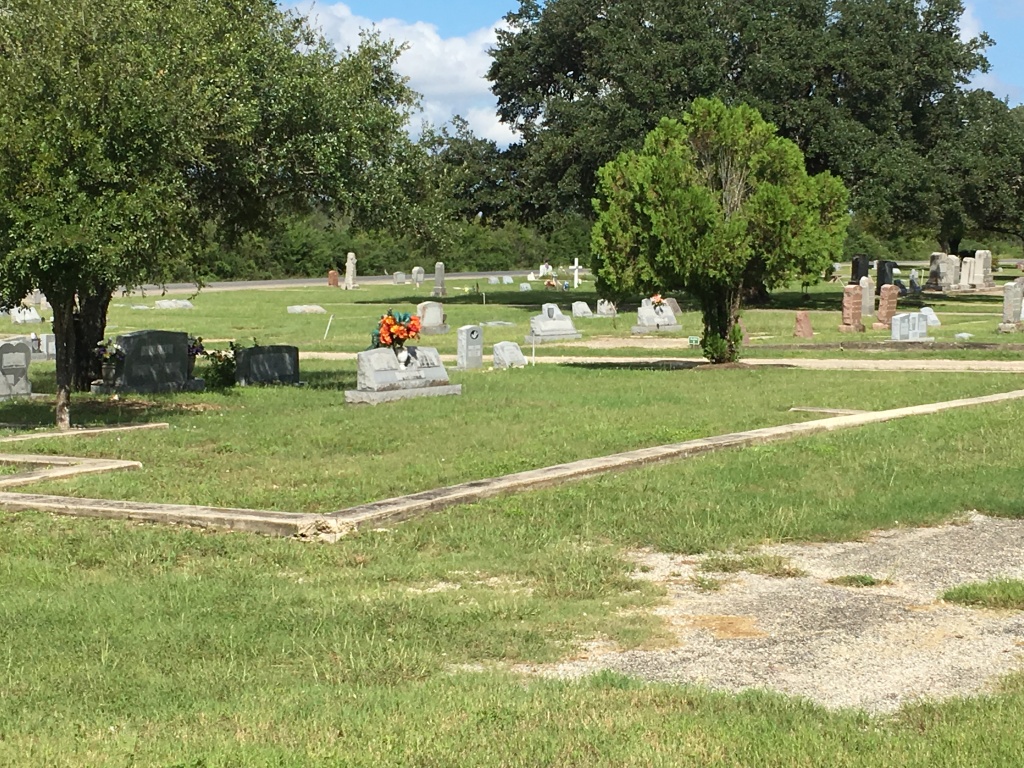 On the way out of town I hit a cemetery.  Apparently, it’s four cemeteries combined into one.  I assume they all started out separately in the approved area for burials and grew together.  I don’t know.  What I did know is that, as fate would have it, a town maintenance crew was there.  Well, as long as they stay on the other side of the cemetery, no big deal.  Well, they didn’t.  Little by little their truck made its way around while I was looking until eventually it came near and one of them came over.  I could have just gone along with the fiction that I was looking for a grave, but I didn’t want to take that chance.  So I explained geocaching to him and once he understood, he left me to it and wished me luck.  And his luck turned out to be useful.  After a bit I decided to give up and started back to my car when I noticed the cache at the foot of a tree about 50 ft from the coordinates.  Log signed, I got back in my car and headed off for…