First of all, I hate rain caching.  Secondly, I hate rain caching. Now, I know this is, technically speaking, only one thing, but it’s such a big thing that it’s worth mentioning twice.  But I went out today because A) chance gave me a mostly childless Saturday and B) I was going to be halfway there anyway.  So I set out this morning to light misting and had recurring heavy rainfall pretty much all day.  There were definitely caches over the course of the day that I had planned to go for, but when I looked at them in the rain I just said “fuggedaboudit” and kept on rolling.  Add to it that the main square was taken up by a town fall festival (it had about 150 people in the rain.  It would have been huge if it was clear), meaning a great number of muggles.  I did see a shop that sold guns and Civil War costuming, but I also saw another black person in town so there’s that.  And I did get to enjoy hot chocolate, listening to old school country tunes interspersed with the occasional polka. 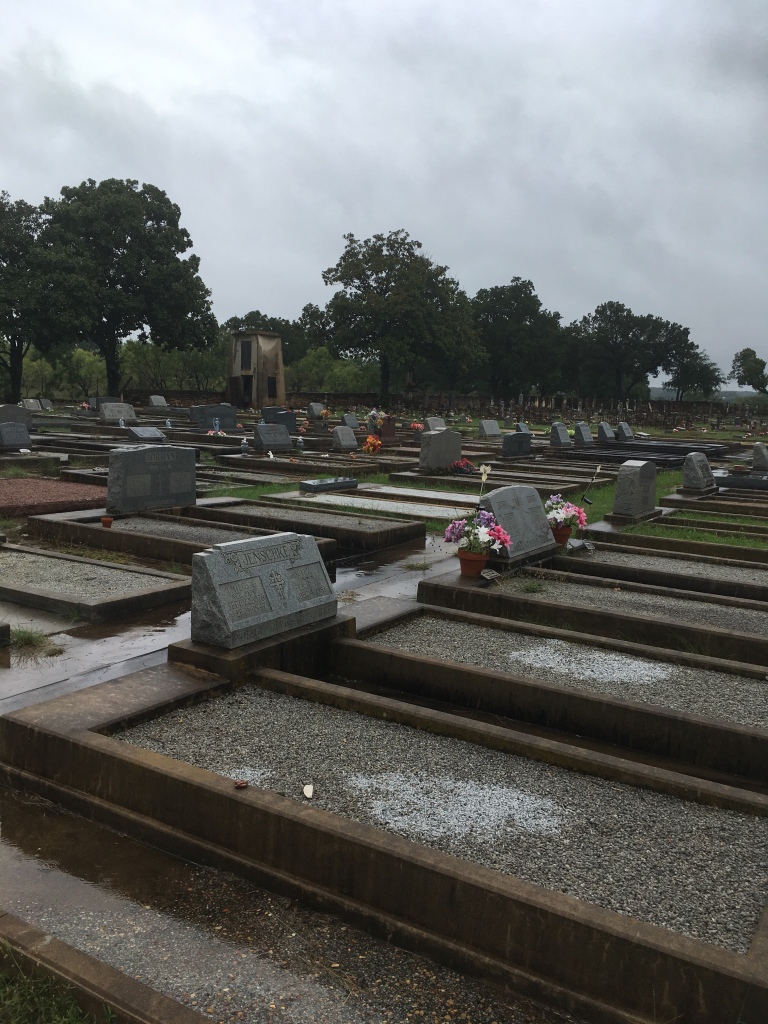 This is St. Mary’s Catholic Cemetery, which is now the site of my westernmost cache.

That eventually led to the children’s section and an ammo can hidden away.  After that were a few LPCs, one of which is actually a challenge to reach 500 caches.  I signed it and noted it was my 280th find.  I’m sure it will also be my official 500th find soon enough… 🙂

The town square also has the most involved virtual I’ve ever seen.  You had to answer 6 questions to get it, taken from things all around the square.  Which I would have happily done had it not been A) raining and B) full of people.  I, sadly, didn’t get anywhere near as much done out there as I might have liked.  But I did get the primary function of getting a cache in another county done.  And I did get to sign the log for a Challenge that I will one day accomplish.  So I don’t consider it a total loss.  One day I’ll probably be back through on the way to Junction or Ozona.  I can hit the German Cemetery and some of the others around town I had too much dampness to go after.  Seriously, what does it take to get a few caching days without torrential downpours or 100+ degree temperatures?